I have seen the core. In my first full time job with NCR Canada, I was privileged to work on early electronic cash registers and accounting equipment. In those days 4096 bytes of core memory was sufficient.

My specialty in the company was point of sale terminals and back office computers that communicated directly and interactively. Today this is trivial. At the time it was a big deal.

Since those days, technology has changed. Hardware has gotten faster and more complex. Software has evolved so much that it dominates our world today. But you know what? It's still the same. A computer has a CPU, various levels of storage, several interfaces and configurable software that makes it all do useful work. More powerful, yes, but the fundamental parts perform the same functions as they've always done.

After leaving NCR and earning degrees in computer science, I maintained an interest in infrastructure. I usually hid it on my resume and emphasized business and requirements architecture skills. But that initial grounding in hardware and electronics stayed with me.

In the 90's I built my first linux computers, sometimes starting a build process that would go on for hours. It was fun. It was learning. Today I always have one or more linux boxes running. And when I look after websites and other SaaS applications, I log in to external linux servers and do whatever installation and configuration is needed.

My interest and experience in infrastructure has helped over the years. Managing hardware installations, mentoring an IT organization, interacting with infrastructure specialists, producing specs for server acquisition, installing and configuring business intelligence software. All these tasks were second nature even when I was hired as a business analyst, requirments architect or project manager.

Today a new PC has at least 4GB RAM. That's one million times as much memory as early electronic cash registers. My interest and skill in working with infrastructure has grown along with the industry.

Every web designer needs a toolkit. From text editors to graphics programs, from table structures to fluid style sheets, the web designer has many tools and techniques to choose from. Zurb's Foundation framework is an excellent kit for today's web designer. It's fluid, it's easy to work with, it has plenty of components, and most importantly, you can apply your creativity to make designs your own. 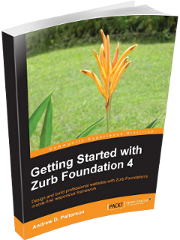 This book documents Foundation's grid system, all its components and plugins, and its generation of custom style sheets. It starts with the basics of Foundation and helps you build your skills as you advance from installation to design, configuration, and customization with examples at every step.

This book will be of great benefit to web architects, designers, and builders. While it helps to be a programmer, it isn't necessary.